Successful start to the season at the Circuito Costa de Almeria

With sk-race-event, we were able to successfully carry out the first race track stop in 2022 despite the pandemic. Our hygiene concept at the race track could be implemented successfully. Fortunately, the Spanish government had still lowered the mask obligation for individual outdoor sporting events, so that we only had to wear the masks inside closed rooms and only up to the seat. We were at the Circuito de Almeria for a whole four days in January and were able to train with our participants in good temperatures, only the last day was slightly rainy but after noon it was possible to drive again. Highlight of the opening event was the visit of the Moto GP riders Alex Rins and Jorge Martin, with whom our participants were not only together on the track but also made proper photos and autographs.

On Wednesday, together with all participants and their families, we were able to experience a very special home evening in Rebecca´s track restaurant. Here there was a traditional paella and other typical delicacies for all, the whole thing was accompanied by live music from our instructor Renè and the German rapper OE Panther. The track training was further enhanced by the participation of Joey den Besten, top rider for the "Motorradtechnik Geenen Racing Team" and Valentin Folger, newcomer and participant in the IDM Supersport 300 series.

We were honored by a report in the Spanish press; The business magazine Almeria writes that events with such a high number of participants and especially in winter, not only directly benefit the Circuito but also the surrounding areas and the city with its hotel and hospitality industry are revived. We are already looking forward to the next visit to Almeria in January 2023. We are now looking forward to our next dates, which are already completely bookable in our online store starting next week. By the way, our track photographer Pedro has shot almost 6,000 pictures. Those who would still like to request pictures of themselves can do so easily by e-mail. 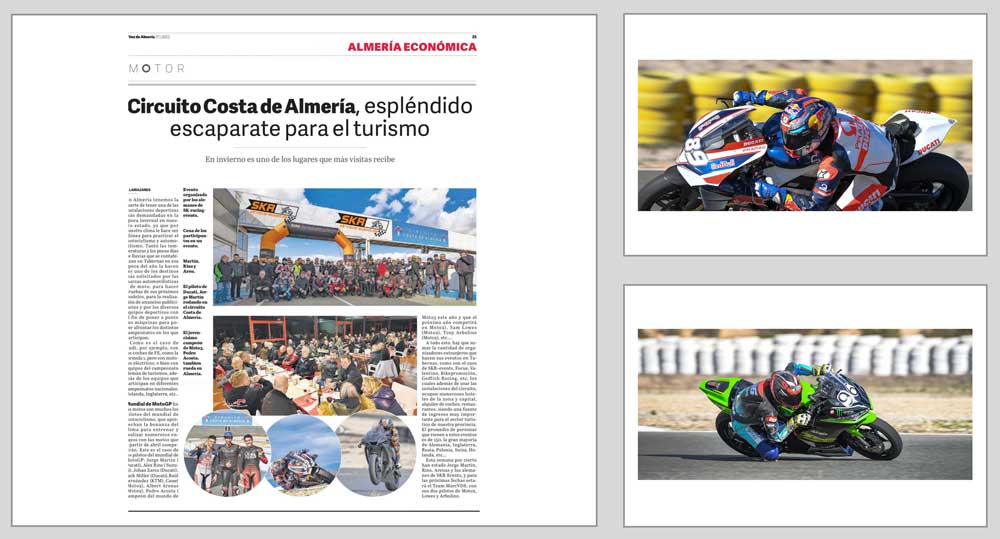 In a few weeks, the organizers will be able to welcome Valentin Folger, currently a rider in the IDM Supersport 300 class, to the Spanish test track. The newcomer is hopefully on his way to MotoGP and wants to take advantage of the perfect conditions on site to stay optimally in training over the winter for his upcoming season. Every motorcycle fan is looking forward to a great scenic environment, nice cornering and of course a free track to really test the performance of the bike. The numerous racetrack trainings of "SK Race Event" offer a variety of possibilities. Besides Greece, France, Italy and Sweden motorcyclists have ideal conditions locally in Almeria (Spain) with Mediterranean climate, in order to connect the racing course feeling equal with the suitable vacation flair. The professional, but brand-independent training, is therefore also interesting for active racers.

Valentin Folger (20) from Obertaufkirchen in Bavaria says he doesn´t particularly like winter. No wonder, because riding a motorcycle at the turn of the year is not really a joy. That´s why the 20-year-old, who is a cousin of Jonas Folger (Moto GP and IDM motorcycle racer), prefers to head for warmer climates. The "Circuito de Almeria" in Andalusia offers the best conditions. Warm days in cold times, the southern Spanish mainland beckons.

"The request from Valentin has made us very happy, because it also means for all other athletes and motorcycle enthusiasts that our racetrack trainings meet professional ambitions," report Holger Krenz and Heiko Kurzawa, managing directors of the servicekult.ruhr GmbH. In less than 7 weeks it will start with its first trainings at the Mediterranean Sea, then Valentin will be available not only beside his own tests/trainings but also beside the other SK-Race-Event participants. In the meantime he’s gladly open for questions, tips as well as photos and autographs. "With Valentin and his family, racing is in their blood. All participants can only benefit from this," explain the two people responsible, who are already promising an exciting race track training.

Until then, an experienced organizational team is organizing procedures, supplies and motorcycle transport for the event in January. The premiere of the "SK Race Event" series in January 2022 in Andalusia is not far away. For many participants, this means enjoying sports, action and a vacation on the Mediterranean instead of cold weather at home. 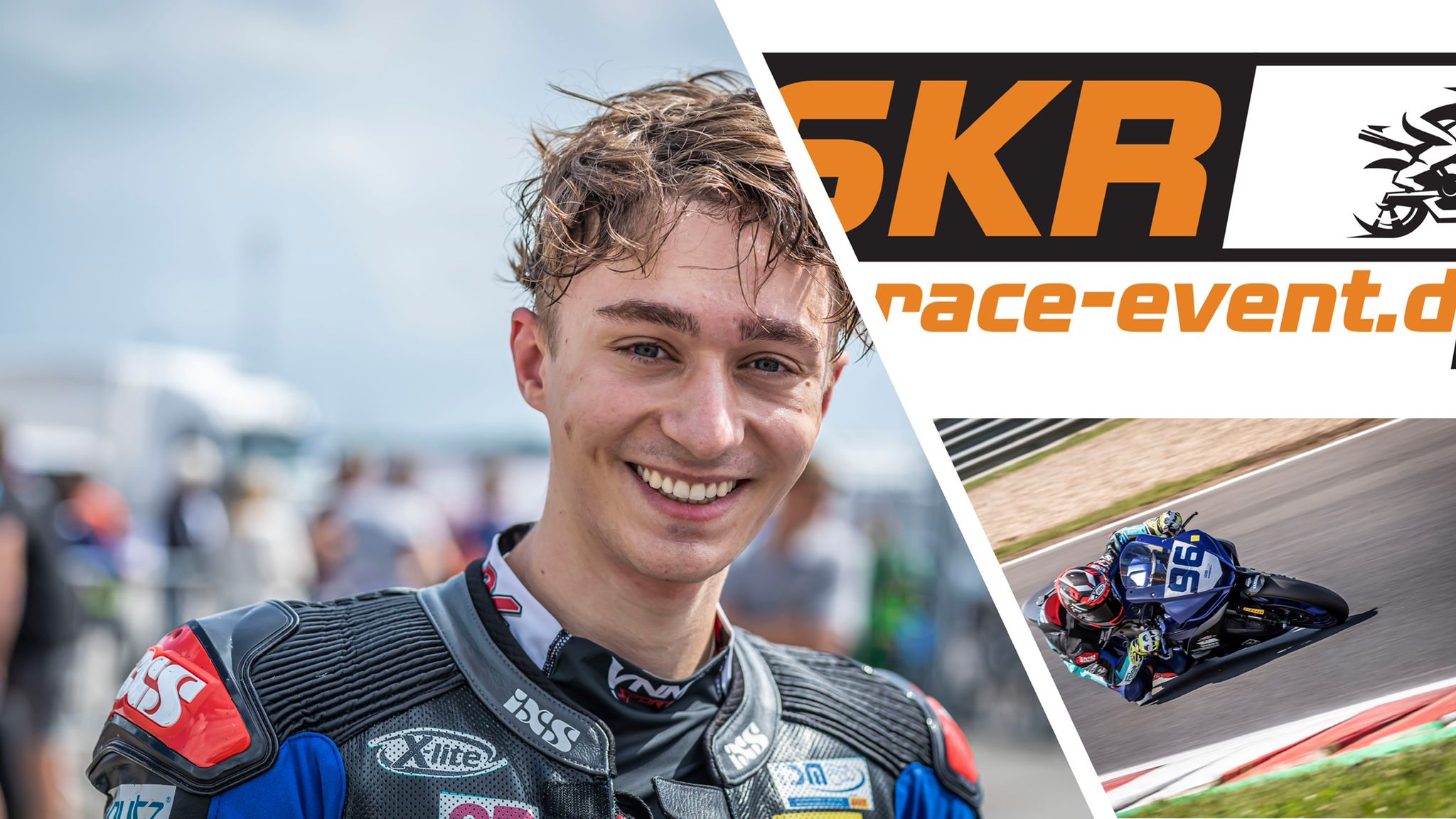 Of course, we at skr keep an eye on the Corona situation for participants and other interested parties and are optimally prepared for the event in Almeria. Spain itself is in second place behind Portugal in the European comparison with low incidences and very high vaccination participation (over 90%). We are implementing a hygiene concept together with the track operator and all our team members are fully vaccinated. We are looking forward to welcome you in Almeria, if you have any questions just contact us! Your team from SKR.

Hello everyone, now it´s just about three months until our debut in Almeria. The preparations for our motorcycle winter training are in full swing for you. Today we would like to introduce our instructor team. Our instructors do not only lead and guide our participants in the "Blue" - beginner group but are present for all participants.

Our instructors observe and accompany the entire training operation and are always available at the race track with their experience. The instructors are also happy to ride with the other groups to see whether the performance level is also coherent. The compliance with safety regulations and the daily driver briefing is also organized and carried out by our instructors. You are welcome to send us your wishes for a single instructor turn by mail or get inspired at the race track :) The whole team is highly motivated, wishes a good time and is looking forward to seeing you again in Almeria. 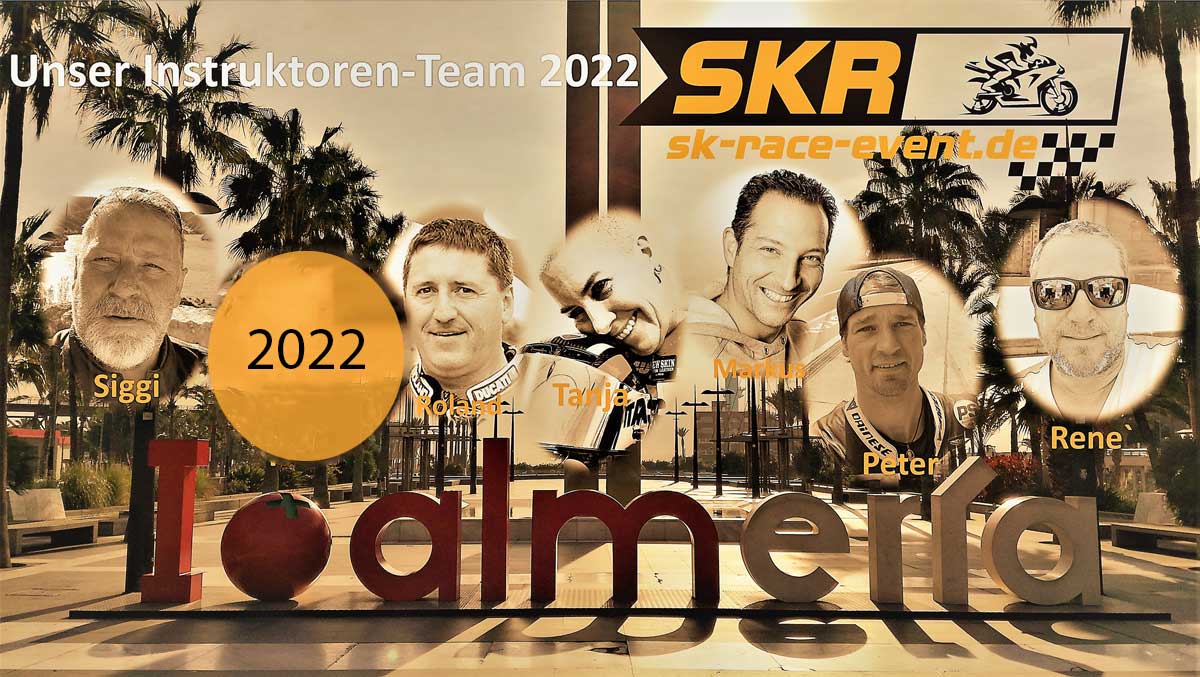 Welcome to the race track, our event in Almeria is only a few months away. Today we would like to introduce you to our organizational team, which is already working hard in the background for you. Transport, logistics, advertising, booking and participant support are already being realized on a daily basis. Our organizational team is always there for you at the race track, accompanies you from check-in to departure and is available in the service and bistro area for all questions and assistance at any time. 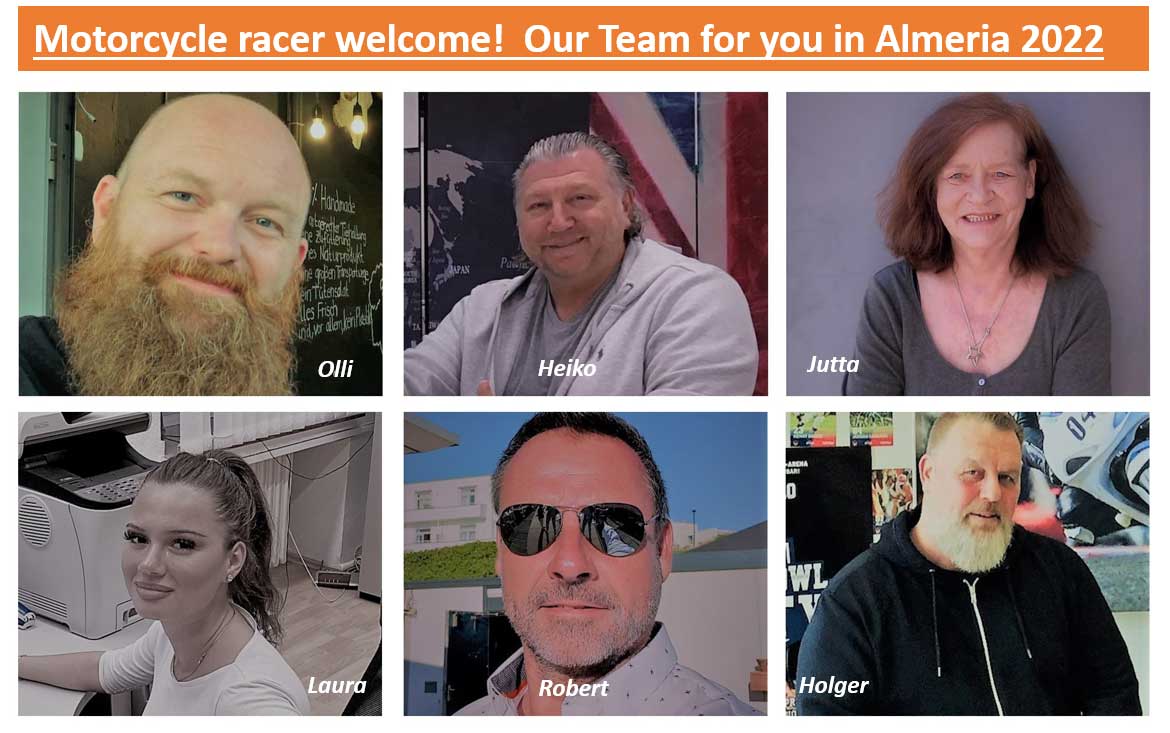 Seizing opportunities in times of crisis

The Corona pandemic has had the world in its grip for more than a year. In addition to health and personal restrictions for each individual, companies in particular are fighting for their livelihoods, and many have already had to file for bankruptcy. But there are also positive examples. One of them even comes from Herne

HERNE. "In the past few months, there were only two options. Either to sit out the pandemic and trust that things will eventually move on. Or to open up, position ourselves differently and look ahead," reports Holger Krenz. For servicekult.ruhr GmbH in Herne, the managing directors opted for the second approach. First, they expanded the company´s divisions with existing and new employees. "servicekult.ruhr has so far specialized purely in local events, but that will no longer be the case from the new year," explains the managing director, who is looking positively to the future thanks to the expansion of his company. 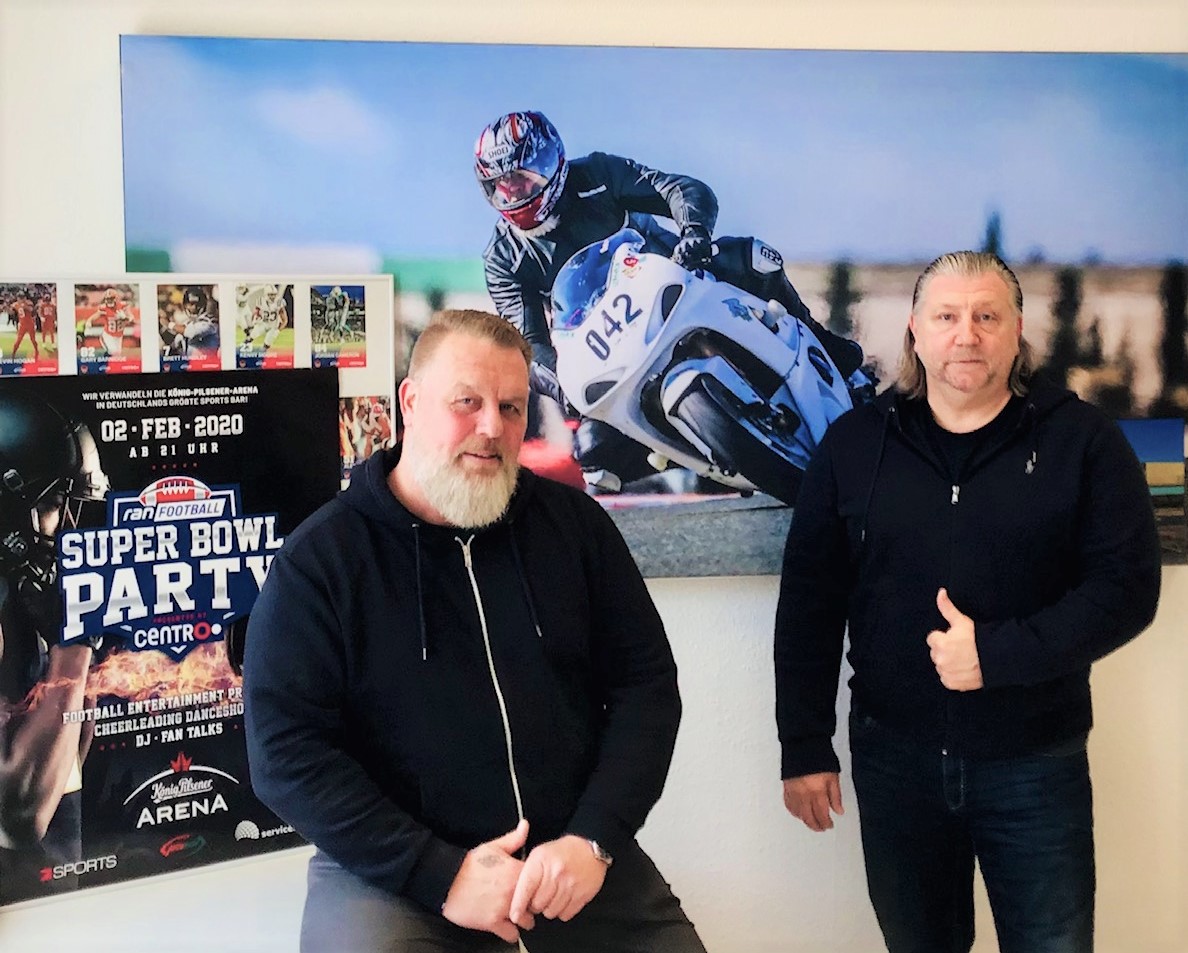 Spain, Hungary, Greece instead of Herne, Oberhausen and Cologne - that´s the new orientation, but it´s not just changing geographically. "In addition to the previous local events, in the future we will offer motorcycle feeling with a vacation flair on the race tracks of Europe," says Krenz. The offers include multi-day participations at well-known race tracks, which are to be completed locally with one´s own motorcycle. The company from Herne organizes the transport of the motorcycles from various bases in Germany to the destination from the center of the Ruhr region. The participants are all united by one goal: to test their driving skills on a race track, to hone their own skills and their own technique. As an enthusiastic motorcyclist, Krenz himself often attended similar events and tested his riding skills on various race tracks in Europe. This is where the idea came to him, because he knows: "Motorcycles often have a very high performance and tempt you to race on the road. But these are often unsafe, there are many hidden dangers, also drivers tend to overestimate," explains Krenz. "Race tracks, on the other hand, are safe, have run-off zones and infrastructure for safety. Here, the technology of a motorcycle can also be pushed to the limit."

The first race trainings for 2022 are set and can already be booked today. The debut celebrates "service-kult.ruhr" in January in Almeria (Spain). The team will be supplemented by experienced employees from the event sector, on site instructors will then introduce the participants to the key aspects of viewing direction, cornering technique and correct seating position. "The special thing, however, is the combination of sport, action and vacation. All locations can be combined with a wonderful short vacation on site," enthuses Heiko Kurzawa, also managing director of the company. He is already looking forward to the start of the year in Andalusia, even though he does not yet ride a motorcycle himself - more racing vacations will follow on the "SK-Race-Event" tour in 2022.

ServiceKultRuhr - We are your community and share your passion!

With our team you will experience the race track feeling with holiday flair on Europe’s race tracks.